That night after I went back from Borobudur, I took another train from Yogyakarta to Surabaya. Mas Agung, Mbak Iin and Puput drove me out to the station. The ticket for Gaya Baru Malam 2 economical class train is 2.8000 rupiahs. The train was late, again, this time I wait for another two hours before the train is arrived at 23.00 pm and took all the passengers from Yogyakarta in 5 minutes transit.

It is more crowded from the first train, so I must walk from one compartement to others compartements looking for the empty seat which have enough place for me and my backpack. I was told that the duration needed to get to Surabaya is about 5 hours but the train is fast enough and I arrived about 03.30 am at Gubeng station Surabaya. Wow that’s fast…and I haven’t sleep at all, I’m talking with the other passengers sitting next in the same row with me.

I also send couple of messages to Jingga, one of my blogger friends from Surabaya, well sebenernya sih Sidoarjo, makanya dia kuwat kae harimau karena setiap hari minum jamu gyahahaha… She is like a google blogger, she could answer all of my questions most of the time, including the train schedule from Surabaya to Denpasar aaawww… *dicubit macan* okay okay, honestly I keep bugging her to gimme the schedule or I might haunted her in Surabaya gyahahaha….

I’ve waited with the other passenger that been kind enough to accompany me that morning. He’s planning to go to his friend house but it is too early anyway to knock someone else’s door so both of us were kinda stuck at the station waiting for the sunrise, for the ticket’s lokect to be open, but its good to have a new friend in such a foreign place for me. Jingga was sending couple of short message, tell me that she’s coming to the station. Aaahhh…another kopdar with my blogger friend, that’s was really a nice surprise.

So after have a breakfast at one of the café in the station (ya olo, di situ jauh-jauh dari Bogor malah ketemu Rahi, temen kampus yang katanya mau ngambil sampel ke Unibraw, Jawa dah mulai sempit rupanya hehehe). I wash my sleepy face, went to the end of the line of the peron, sitting, waiting for Jingga(bel) to come. Honestly, it kinda freak me out since I never seen her before, she never put her pic, not a clue about her, all blank except for the phone numbers hehehe….and at the same time when I was thinking about it, she called and told me that she already arrived in the station and looking for me, damn now I don’t have time to run away from her. My heart’s beat start beating faster…. Better stop this one before its really turn into a thriller movie dan dikemplang jeng Jingga hehehe

From the place that I was standing, I could see someone who seems looking around for someone, but I’m not sure about it, so I called and it is her, its Jingga(bell). A…err…ehm…a young slim female figure in an office suit smilling back at me – with a knife on her hands arrghh…..gyahahaha…just kidding, she was only holding a bag on her hand, look what happen if I lack of my beauty sleep kan? hehehe. At last, it is so glad to see her directly after all this comments, postings and messages – the same like like what I felt for jeng Carra, we hugging each other and went directly to Dunkin Donuts. Hey, I start to think that donut is the first meal that polite enough to eat with someone you’ve just met since I have it twice *dikeroyok Carra n Jingga*. 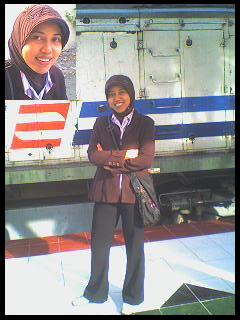 She was a girl, not a yellow cat like the gravatar picture in her blog, bright eyes, bright smile and a smart one. The one who still struggle to start her own bussiness with her friends. Gambatte kudasai one chan ^^ *peyuk peyuk*. She stopped by to the station for a while, telling her boss that she’s picking up a cousin from the station. Hummm I wonder wether you could use the same reason since I’m writing it down here dear *hiding from Jingga*. We talk for a while and of course take a very very narcis pictures infront of the parked train before she has to get back to the office. Thanks for stopping by ya jeng, really…really appreciate it *hugz* then I’m back sitting on the peron waiting for my train, just one more train to take me to Denpasar.

At 09.15 am based on the train sched, I step into the train not knowing that the girl in the locket cut out my ticket from the main direction. The train, Mutiara Timur direction is from Surabaya to Banyuwangi Baru, then the passenger are gonna get picked up by bus to Terminal Ubung, Denpasar, there were onlu business (40.000 rupiahs) and executive class (55.000 rupiahs). Feel exhausted, I sit, talk for a while with Tante Eli – a passenger from Jakarta with her husband, one son and three daughters who sit accros the alley. I still watch the view of Porong with the hot mud dam through the train’s window, then I’m death to the world for couple of hours. I’m waking up more fresh than before, washing my pillow face and talk with Tante Eli, she was moving out from Jakarta to Denpasar. Both with her husband she was planning to open a café or restaurant in Denpasar, hopefully its already open nexttime I visit Bali ya, siapa tau bisa dapet diskon toh kalo mamam di situ *harapan kita dot com*

My seat-mate, an old man – Pak Andre was join the conversation, then we were talking about our direction and our plan, we were mention about the ticket price and I just realized that my ticket is a half way. My ticket is to Banyuwangi Baru only argghhh… lack of sleep definetelly make my head cloudy, not checking it carefully. So I’m talking to one of the train staff wether I could join the bus to Denpasar, of course paying the rest of the ticket cost to Denpasar for 50.000 rupiah. The ticket price from Surabaya to Denpasar is 105.000 rupiahs. Tante Eli offered me to join her family to Denpasar, a friend of her will pick them up at Gilimanuk port but at that time I thought I’m going with the bus. Yup and there is the bus, the small one and the pasengers is almost out of the window, they running out of seats. So I decided to go with Tante Eli  and her family hehehe.

We were sitting on the station waiting for the crowd to disappear while we were chewing some snacks on the bench, then we go using becak to carry us and all of the bags to the Ketapang port. You could walk from the station to the port because it is so close. The ticket for the ferry is 6.000 rupiah for adult. In less than an hour we arrived in Gilimanuk port, where Tante Eli’s friend already waiting. I joined them until Denpasar. At midnight when we arrived at Denpasar, we say goodbye at the Central Park and I went into Simpang Siur intersection using a cab, calling Imul and waiting for Kadek to pick me up to their house.

At last, here I am in Bali.

19 thoughts on “Another blogger date with Jingga (bel) at Gubeng”